Born in Virginia, Hall spent the majority of his first 20 years in Memphis, Tennessee. His earliest memories of music are listening to John Denver records and attending orchestral performances on the Fourth of July. At age 12 he began playing guitar when a friend introduced him to the music of Rush and taught him some basic chords on an old acoustic guitar. “In those early days, I was influenced by a wide range of guitar players -- Alex Lifeson (Rush), Eric Johnson, Yngwie Malmsteen, Trevor Rabin (Yes), David Gilmore (Pink Floyd), and Andy Summers (The Police) - among others.”

Throughout his teens and early twenties Hall performed in a local rock band and as a solo act. Along the way, he continued to study music theory and often practiced for hours almost every day. At 21, “I was introduced to acoustic fingerstyle music and heard Will Ackerman for the first time.  For a long time after that, I left the electric guitar behind and immersed myself in that solo acoustic playing style. As I discovered other players in that vein, my emphasis really shifted from electric to acoustic, both steel-string and nylon-string. I started listening to Alex de Grassi, Franco Morone, Don Ross, Michael Hedges, Andrew York, Ottmar Liebert, and other great players in that solo guitar space.  For years, my electric guitars rarely made it out of their cases.  I really enjoyed playing out at places like coffee shops, and I was always excited to learn some new fingerstyle piece.  It's very rewarding to be able to play the melody, base, and harmony in a fingerstyle tune.  You're a one-man band.”

Hall spent the first half of his music career performing on guitar and the latter half studying piano/keyboards/synthesizers, composing, orchestrating, arranging, and producing - while managing to continue playing guitar along the way. He has studied and performed electric, acoustic fingerstyle, and classical guitar across numerous genres that include solo guitar, classical, folk, rock, and heavy metal. Hall is especially grateful for the guitar instruction he received over the years from legendary players such as Shawn Lane, Alex de Grassi, and Franco Morone.

The next musical evolution for Hall encompassed his passion for film scores. “When I was a teenager I had occasional opportunities to take guitar lessons from Shawn Lane. I soon realized he was a huge fan of film scoring and an accomplished pianist – in addition to being one of the world's best guitarists. Shawn actually helped me to expand my awareness of film scores because it made a huge impression on me that this incredible guitar player found a lot of his inspiration from the works of John Williams and other famous composers.  As I started listening to the scores for films like Gladiator, Braveheart, the Spielberg movies, and way too many others to try to list here, I developed an immediate interest in the impact and complexity of orchestral and hybrid music.”

The works of John Williams, Hans Zimmer, Harry Gregson-Williams, James Horner, and others have inspired Hall, and the styles of these composers echo in Hall’s film score compositions, (some of which can currently be heard on his first release, "Understanding The Signs").  Hall’s study program at Berklee College focused on “Orchestration and Scoring for Film and Television,” and the knowledge he acquired in those programs is evident across all three of his published releases to date.

Hall’s first steps into multi-instrument composing began in the early 2000s when he purchased his first keyboard, set up his own studio, and began to explore the possibilities of creating orchestrated works using a combination of live musicians and modern technologies. “When composing I will often begin by sitting down at the piano; I have always found it easier to visualize concepts on the piano as opposed to the guitar,” explains Hall. “I often start with piano to begin ‘sketching’ an initial idea which could be a melody line, a harmony, or a progression. Then I move those ideas to other instruments and begin orchestrating and arranging them. From there, I’ll continue to develop ideas until the final orchestration and arrangement fall into place.”

After years of focus on orchestral and hybrid composition, Hall picked up the guitar again.  "After a time, I simply realized how much I love playing the guitar and how much I missed it. There just weren't enough hours in the day to keep all of my musical interests running in parallel when I was learning orchestration and multi-instrumented writing.  So, I decided to go back to my primary instrument and to try to incorporate what I could from the film scoring and orchestration side.  I hope that's come through on the acoustic guitar album and the latest electric guitar release.  For me, it was an opportunity to balance those musical interests while maintaining a focus on the guitar." 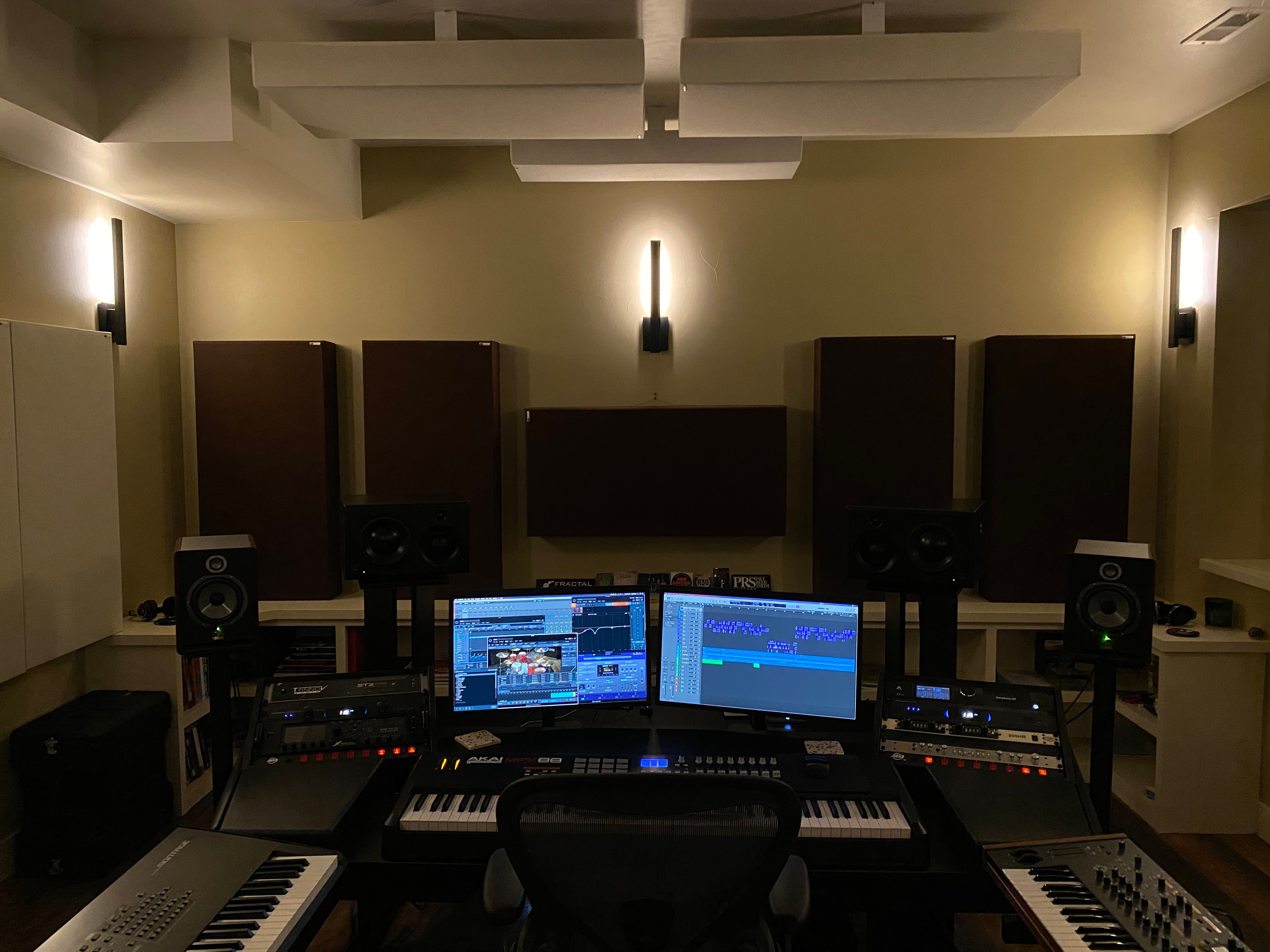